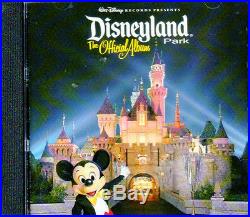 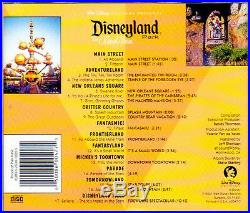 LIKE NEW CONDITION FROM A SMOKE/PET-FREE HOME!! Disneyland Park: The Official Album (2001 CD) was the official album for Disneyland in 2001. It is now rare and out of print. Track listing All Aboard! ” – Main Street Station – 0:32 “Flitterin'” – Main Street – 1:45 “The Tiki, Tiki, Tiki Room” – The Enchanted Tiki Room – 2:38 “The Indiana Jones Adventure” – Temple of the Forbidden Eye – 3:27 “Swanee River” – New Orleans Square – 1:25 “Yo Ho (A Pirate’s Life for Me)” – The Pirates of the Caribbean – 5:45 “Grim Grinning Ghosts” – The Haunted Mansion – 5:38 “Splash Mountain” – Splash Mountain – 8:08 “The Great Outdoors” – Country Bear Vacation – 2:10 “Finale – Fantasmic! – 3:31 “All Aboard the Mine Train” – Frontierland – 1:46 “It’s a Small World” – It’s a Small World – 3:54 “Thru the Mirror” – Downtown ToonTown – 2:14 “Star Tours” – Star Tours – 4:07 “Space Mountain” – Space Mountain – 2:47 Believe… There’s Magic in the Stars – Fireworks Spectacular – 10:10 Production Compilation Executive Producer: Randy Thornton Production Assistant: Valerie Van de Yacht Mastered by Jeff Sheridan at Soundworks, Hollywood, CA Album Design by Steve Sterling REVIEW. Picked this one up at the Main Street Music Shoppe, and basically I was looking for a more extensive Tiki Room track other than the song only included in Official Disneyland Theme Park cassette, and the track did have more added dialogue of parrots conversing around traditional song. This collection also has more elaborate works of other songs, including Splash Mountain which has a solid eight minute length featuring all of the song mixes in the ride. For some reason, they included Great Outdoors for an extinct ride I’m sure was already gone when this thing was issued, but there it is. Also pleasant additions to previous theme park music releases is the pre-vamped Star Tours with basic ride track. All in all this is a good Disneyland theme park music highlight with ten minute firework theme as finale of Magic In The Stars presentation. LONG OUT-OF-PRINT & EXTREMELY HARD-TO-FIND ANYMORE…. ESPECIALLY IN THIS CONDITION!! FROM MY PRIVATE COLLECTION!! The item “Walt Disney Records Presents DISNEYLAND PARK THE OFFICIAL ALBUM (SOUNDTRACK CD)” is in sale since Thursday, September 19, 2013. This item is in the category “Music\CDs”. The seller is “mili_1975″ and is located in Hollywood, Florida. This item can be shipped worldwide.