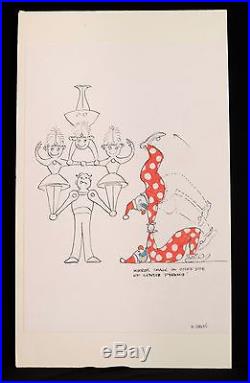 This stunning ORIGINAL CONCEPT ARTWORK piece was rendered by Marc Davis, one of the most celebrated Disneyland artists of all time. It is a very rare example of the artistry and craftsmanship of one of Walts original hand-picked artists. Walt brought Marc Davis from the studio to help imagine Disneyland, and his work can be seen in the character and scenario designs of Pirates, Haunted Mansion, America Sings/Splash Mountain, Jungle Cruise and many, many more. Very, very few of these stunning examples of Marc Davis concept art ever make their way to the collector market. After Marc left Disney in the 1980s, he was contracted by Landmark Entertainment Group along with fellow imagineers Herb Ryman, Phil Mendez, Ed Sotto, etc. To “imagineer” designs for Six Flags attractions and other theme park based entertainment. This delightful piece is from a Six Flags indoor theme park in Baltimore called the Power Plant. Marc helped develop a rich backstory for this park, and designed many characters and scenarios, including these designs for the Power House Toy Theater. The park was a Victorian-themed experience, very much in line with Disneyland’s Main Street aesthetic. See photo 2 for a reference to the finished show! Marc’s toy acrobats are in the center of the photo. And are an exact translation from the page to the stage. Also, his clowns flank the scene! This is an original, one-of-a-kind piece of artwork that was never intended to be seen by the public. This type of concept art is rarely is offered for sale, and is usually kept in a vault (like Disneys Imagineering archives) and rarely referenced except for books or mechanical reproduction. I have never seen these images used commercially. Altogether, the artwork is in wonderful vintage condition and is ready to frame and display. The piece measures 8 1/2″ by 12 1/2″ inches, mounted on Landmark design board that is roughly 9×16 inches. Walt Disney once said of Marc Davis, Marc can do story, he can do character, he can animate, he can design shows for me. All I have to do is tell him what I want and it’s there! He’s my Renaissance man. As such, Davis touched nearly every aspect of The Walt Disney Company during his tenure. He began as an animator, whose supporting work on. Snow White and the Seven Dwarfs. Inspired Walt to promote him to full animator. In the ensuing years, Davis breathed life into a bevy of iconic Disney characters, including Cinderella, Alice (in Wonderland), Tinker Bell, Maleficent, and Cruella De Vil. Then, in 1962, Walt Disney transferred the versatile Davis to the Imagineering department to help plan and design attractions for Disneyland and the 1964 65 New York World’s Fair. While at Imagineering, Davis conceived of designs for such classic attractions as Jungle Cruise, Pirates of the Caribbean, and Haunted Mansion. The item “MARC DAVIS ORIGINAL ART Theme Park Concept Acrobats Clowns Disneyland Disney” is in sale since Wednesday, January 04, 2017. This item is in the category “Collectibles\Disneyana\Contemporary (1968-Now)\Animation Art, Cels”. The seller is “robotrussell” and is located in Santa Monica, California. This item can be shipped to United States, to Canada, to United Kingdom, DK, RO, SK, BG, CZ, FI, HU, LV, LT, MT, EE, to Australia, GR, PT, CY, SI, to Japan, to China, SE, KR, ID, to Taiwan, TH, to Belgium, to France, to Hong Kong, to Ireland, to Netherlands, PL, to Spain, to Italy, to Germany, to Austria, RU, IL, to Mexico, to New Zealand, SG, to Switzerland, NO, SA, AE, QA, KW, BH, HR, MY, CL, CO, CR, PA, TT, GT, HN, JM.