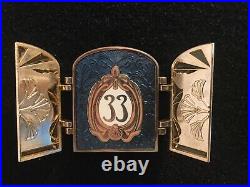 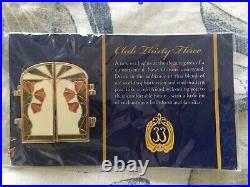 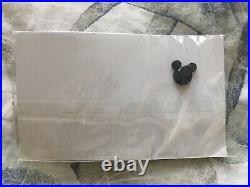 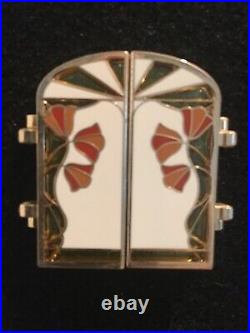 Brand new, never removed from plastic envelope pouch. The pin that started the new era!! This limited edition pin features the new logo of Club 33, which debuted in July 2014. This pin celebrates the grand re-opening of Club 33 (after it was closed for six months for refurbishment). It was made available to Club 33 members in a Random Selection Process (RSP), which had to be picked up in person. It was also made available to members at the Member Preview on July 16, 2014. The front of the pin resembles the gates at New Orleans Square, leading to the new entry into Club 33. Once opened, it reveals the new logo of Club 33. It came on a card which states: A new era begins at the elegant gates of a quintessential New Orleans courtyard. Drink in the ambiance of this blend of old world sophistication and cool modern jazz. Like an old friend welcoming you to their comfortable home with a little bit of enchantment both fresh and familiar. Disney Club 33 Grand Re-Opening Gates & Logo Pin LE 1000 NIP RARE!!! . The item “Disney Club 33 Grand Re-Opening Gates & Logo Pin LE 1000 NIP RARE” is in sale since Wednesday, August 26, 2020. This item is in the category “Collectibles\Disneyana\Contemporary (1968-Now)\Pins, Patches & Buttons\Theme Parks\Disneyland/DCA”. The seller is “magnum*media” and is located in Los Alamitos, California. This item can be shipped to United States.