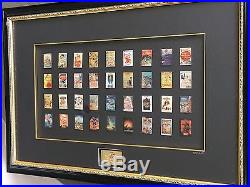 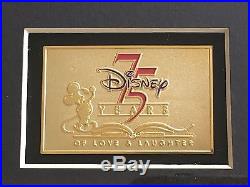 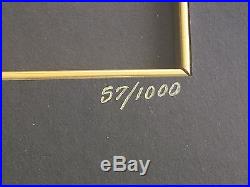 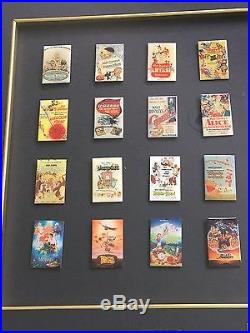 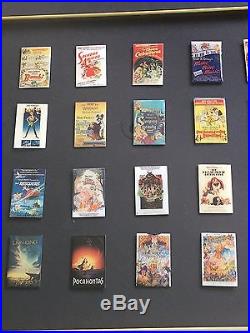 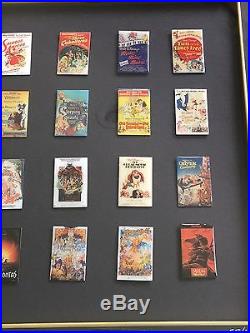 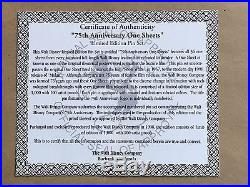 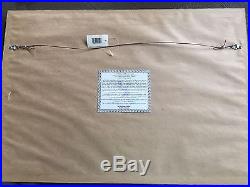 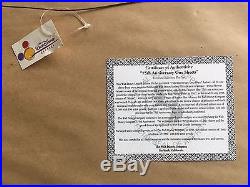 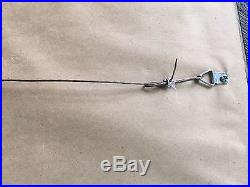 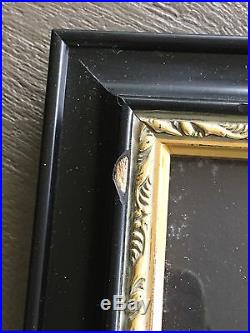 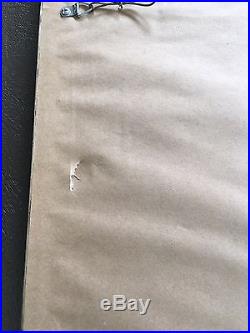 “75th Anniversary One Sheets” Limited Edition Pin Set is one of the rarest, largest and most beautiful framed pin sets in existence and would be an incredible addition to your Disney collection! Description: This Walt Disney Limited Edition Pin Set is entitled “75th Anniversary One Sheets” features all 36 one sheets from every animated full length Walt Disney feature film released to theater. A One Sheet is known as one of the original theatrical poster’s used to market the feature film. This pin set encompasses the original One Sheet used to market the film “Snow White” in 1937, to the modern day 1998 release of “Mulan”. Although there are not 75 years of feature film releases, the Walt Disney Company was formed 75 years ago and these One Sheets pay tribute to the diverse change in animation with technological breakthroughs with every feature film released. It is compromised of a limited edition size of 1,000 with 100 artist proofs. Each pin is appliquéd with enamel and features vibrant colors. The title pin featuring the 75th Anniversary logo, is individually numbered. Packaged and exclusively produced by The Walt Disney Company in 1998, the edition consists of limited edition of 1,000 with 100 artist proofs. Gold plaque on front of piece reads “Disney 75 Years of Love & Laughter”. This particular framed set is number 57 out of 1,000 sets produced and each pin is numbered on the back. The Individual pins include: The Title Pin, Snow White & the Seven Dwarfs, Pinocchio, Fantasia, Dumbo, Bambi , Saludos Amigos, The Three Caballeros, Make Mine Music, Fun and Fancy Free, Melody Time, Ichabod and Mister Toad, Cinderella, Alice in Wonderland, Peter Pan, Lady and the Tramp, Sleeping Beauty, 101 Dalmatians, Sword in the Stone, The Jungle Book, Aristocats, Robin Hood, Winnie the Pooh, The Rescuers, The Fox and the Hound, The Black Cauldron, The Great Mouse Detective, Oliver and Company, The Little Mermaid, Rescuers Down Under, Beauty and the Beast, Aladdin, The Lion King, Pocahontas, Hunchback of Notre Dame, Hercules and Mulan. The Certificate of Authenticity is sealed to the back of the piece along with a sturdy, wire hanging/installation system. The framed piece is 26″ w x 18″ h. Although this item has never been hung on a wall or ever displayed in any way (The WD Gallery tag is still attached to the back), there is a minor chip in the frame (see photo) as well as a small tear in the paper on the back of the piece (see photo). This is why this item has been categorized as “used”. This item comes from a smoke free home. Thank you for viewing this truly special and one-of-a-kind collectible! The item “Disney DLR 75th Anniversary One Sheets Framed 37 Pin Set Disneyland LE” is in sale since Saturday, May 20, 2017. This item is in the category “Collectibles\Disneyana\Contemporary (1968-Now)\Pins, Patches & Buttons\Theme Parks\Disneyland/DCA”. The seller is “letthewookiewin_23″ and is located in Akron, Ohio. This item can be shipped to United States, Canada, United Kingdom, Denmark, Romania, Slovakia, Bulgaria, Czech republic, Finland, Hungary, Latvia, Lithuania, Malta, Estonia, Australia, Greece, Portugal, Cyprus, Slovenia, Japan, China, Sweden, South Korea, Indonesia, Taiwan, Thailand, Belgium, France, Hong Kong, Ireland, Netherlands, Poland, Spain, Italy, Germany, Austria, Russian federation, Israel, Mexico, New Zealand, Philippines, Singapore, Norway, Saudi arabia, Ukraine, United arab emirates, Qatar, Kuwait, Bahrain, Croatia, Malaysia, Chile, Colombia, Costa rica, Panama, Trinidad and tobago, Guatemala, Honduras, Jamaica.