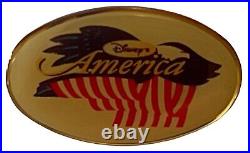 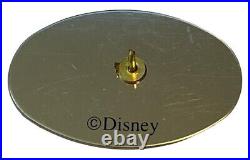 All of these costs are included in what you are paying. In the past our images were made using a scanner or camera at very high resolution, exposing many minor flaws that are NOT visible to the human eye. Please know that as these images are also at very high resolution, flaws, marks, and other imperfections not or barely visible to the human eye may be exposed. I also remove the outer plastic wrapper in order to give the images a cleaner line and I return them to the wrapper after taking the image. Description: A true rarity as this project never proceeded to the construction phase for various reasons (see below). This pin was likely given out to Cast Member’s and/or local VIP’s to promote the idea of the park. Pin created for Disney’s America, the proposed theme park planned for Virginia but never built. It shows a bald eagle in flight over the red and white stripes of a US (American) flag and reads “Disney’s America” across the eagle. Disney’s America was a proposed Disney theme park in the early 1990s. A site was selected in Haymarket, Virginia, approximately five miles (8.0 km) from Manassas National Battlefield Park and 35 miles (56 km) west of Washington, D. Accessible from Interstate 66. Disney’s America would have consisted of nine distinctly-themed areas spanning 125-185 acres (51-75 ha), and it would have featured hotels, housing, a golf course, and nearly 2,000,000 square feet (190,000 m2) of retail and commercial development. Its theme would have been dedicated to the history of the United States, and it was scheduled to open in 1998. The project had initial support from various politicians and local officials, but it soon faced opposition from citizen’s groups and historians who objected to Disney’s planned portrayal of historical events, as well as the potential impact on nearby historic sites. It was canceled in September 1994 following the failure of Euro Disney (now Disneyland Paris), the death of Frank Wells, rising costs, and the prospect of reduced profits with the park being closed for four months each year. This pin was removed from it’s original sealed wrapper for photo purposes. Year of Release: 1993? Traders Having This Pin: 4. Traders Wanting This Pin: 27. Backer Card: Never Came On A Card. Edition Type/Size: Unknown Edition Size. Please read all information below! PLEASE ALSO NOTE, ALL claims for damaged, or missing items must be made to me via. Within 48 hours of receipt of the package. Any failure to follow these guidelines results in ALL liability being borne by the purchaser. This item is in the category “Collectibles\Disneyana\Contemporary (1968-Now)\Pins, Patches & Buttons\Other Disney Pins & Patches”. The seller is “hidden_walt” and is located in this country: US. This item can be shipped to United States, all countries in Europe, all countries in continental Asia, Canada, Australia, South Africa, Bahamas, Mexico, New Zealand, Brazil, Chile, Colombia, Costa Rica, Panama, Trinidad and Tobago, Guatemala, El Salvador, Honduras, Jamaica, Antigua and Barbuda, Aruba, Belize, Dominica, Grenada, Saint Kitts-Nevis, Saint Lucia, Montserrat, Turks and Caicos Islands, Barbados, Bermuda, Bolivia, Ecuador, Egypt, French Guiana, Guadeloupe, Cayman Islands, Martinique, Nicaragua, Peru, Paraguay, Reunion, Uruguay.